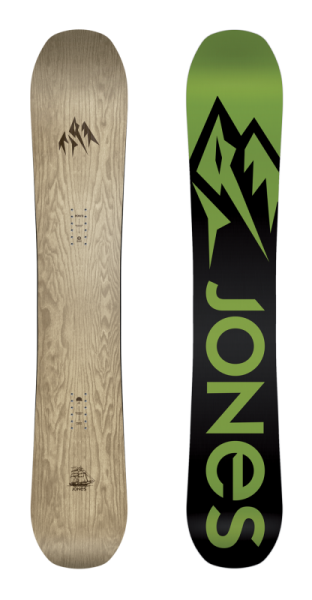 Ideal for Freeriding and Fall-line Stomping

The legendary Flagship is the cornerstone of the Jones board line. Jeremy Jones spent two decades perfecting this freeride board design and thousands of riders worldwide now revere the Flagship as the most confidence inspiring snowboard on the planet. While other snowboards may mimic the Flagship’s muscle bound shape and flex profile, rest assured there is still nothing like the real thing. The Flagship is powerful and responsive thanks to the mellow Magne-traction, Blunt Nose and Directional Rocker profile, but it’s the iconic Oak wood top sheet that’s the game changer. The Oak wood topsheet delivers a lively but damp board feel that pops and stomps unlike any other freeride board out there. NEW for 2016, the Flagship features 100% burned ‘no-ink’ logo graphics.

A hybrid rocker/camber flex pattern defined by more tip rocker then tail rocker and camber between the bindings. The rockered tip floats the board’s nose and improves maneuverability while the camber underfoot provides edge hold and response. A slightly rockered tail maintains the power and stability of a traditional board but helps keep the tail catch-free initiating turns and landing switch. "My experience is that most falls in freeriding start from the nose of the board – you either go over the bars in powder, the nose gets caught under a weird crust and tosses you, or you hit a hard tranny at the contact point of the tip and get bucked. Directional Rocker eliminates most of these falls." - Jeremy Jones